The Age of Jane Fonda 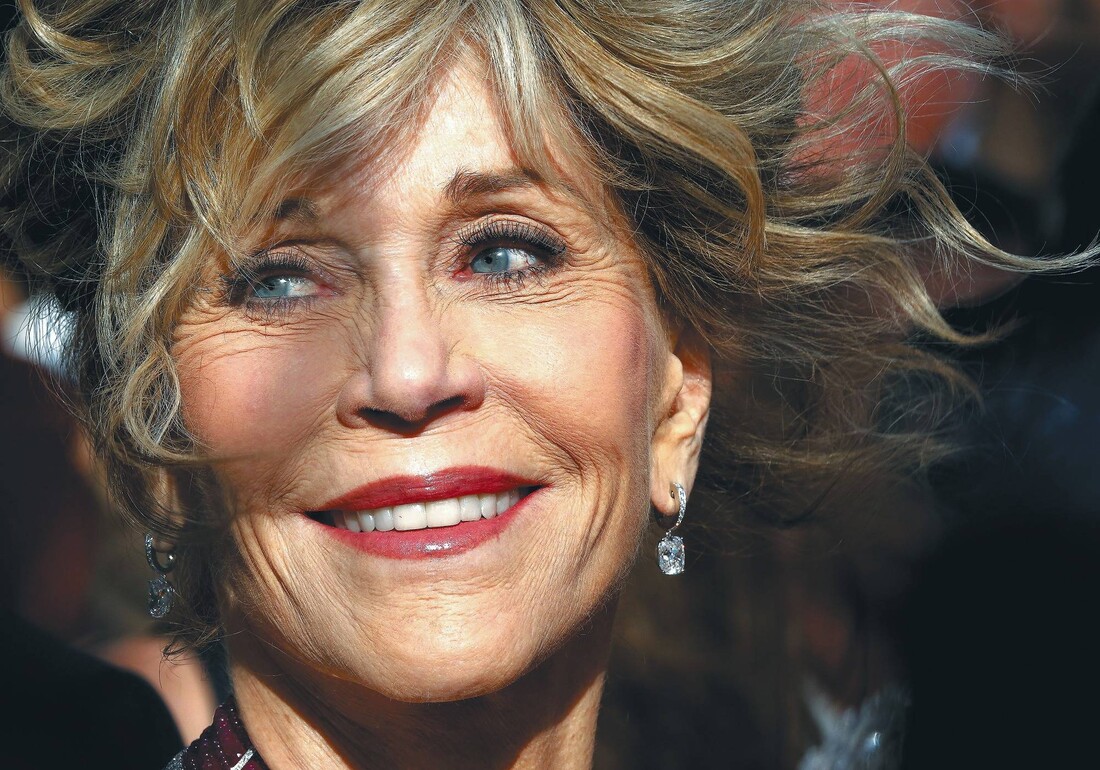 Not five performances, mind you: just five roles. Jane Fonda's career has spanned six decades, and we have witnessed a series of transformations. It is one of the Hollywood careers that really makes sense in terms of an arc. These are, for me, the turning points that define that career.

In Walk on the Wild Side 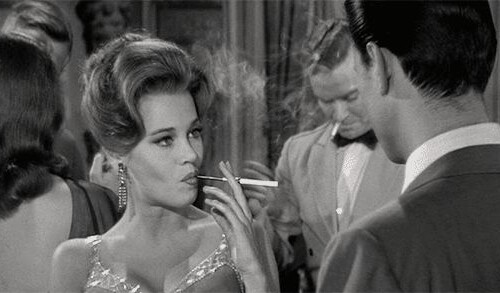 I think it is important to start by saying that it was relatively easy for Fonda to make it in the movies, and this thriller followed her first appearance as a college girl in The Tall Story. She had worked as a model, had the looks, and one can imagine how at the start of the sixties she could turn heads and generate attention.

Although she is not at the top of the cast list, she has almost a starring role after only one year in Hollywood. It is uncanny how this role foreshadows Fonda's career in the 1960s, which is quite consistent: in America, she played naive sex kittens, and in France, she played voluptuous sex kittens, but sex and her body was from the start a distinctive part of her persona.

Her young whore Kitty here is more voluptuous than naive at one point, and I love the way she uses her body. Whenever I hear the "smouldering temptress" bit in Moulin Rouge I think of Fonda in this movie trying perhaps a bit too hard, but, hey, there had not been a great deal of whores on screen before.

In terms of typecasting, it is her first prostitute role, and prostitute roles would be still remarkably few and far between in the sixties, and they were all being taken up by Shirley MacLaine. MacLaine got there first (her wonderful Ginny in Some Came Running), but Fonda dared to explore sexuality in ways MacLaine just didn´t (maybe couldn't, but that's another post). She also develops a very knowing voice. Her voice, her trademark diction are perfectly recognizable here, and it has been a key criterion to follow her career in this post.

Jane Fonda in They Shoot Horses Don't They?

One of the most amazing choices in her career. Much as I love Fonda, she was really hard to take seriously through the sixties, and her act was becoming stale by 1968. No, at this point I don't think she was aware of how her performances were in line with certain approaches to women's objectification, but the fact is they did not push her talent.

And suddenly this. For those used to her pouty women of the past seven years, this performance must have been shocking. It wasn't the sex: her Gloria is a woman who seems to be beyond sex. The film was about desperation and used the metaphor of dance marathons in the 30s.

And quite unexpectedly, Fonda was featured for the first time in a gritty realistic film that mature audiences were supposed to take seriously. Her voice hoarsened, she seemed to be spitting out every word, and Barbarella was definitely left behind: her figure was now angular, slightly awkward, and also assertive.

And then those eyes that first said "I don't give a shit" and ended up by silently, pleadingly, stating the film's title.

As a working girl in Klute

Both Gloria and Bree, her role in Klute, are watershed moments in Fonda's career, but they are about different aspects of her persona.

The first shows the ability to change and do grit, the second is about sexuality, remains among the most influential performances of the 70s, and it brought her an oscar in a decade of controversial films. The early seventies were dizzy times for her: first her divorce to Vadim, her trip to Vietnam, meeting Tom Hayden, that film with Godard (no less, and how he used her).

She has explained some of her choices and she would probably do things differently, but at the time it gave her some sort of aura. Here was a woman earnestly pushing through, doing things. Actually, this became her "thing" in the next decade: all of her plots were about women traveling from innocence to experience.

Then again Klute is something else. Although not the title role, there is something in Bree that presented a different version of prostitution as some kind of (problematic) empowering of certain women. The way she cajoles, seduces, and then the way she talks to her psychiatrist, all contribute to portray not just a character, but, one assumes, the start impersonating this character.

She rehearsed her role and clearly felt comfortable in it. She makes a lot of being in control, only to be saved by the guy at the last minute. She would play prostitutes again, but never in such a complex way.

In The Morning After, with Jeff Bridges 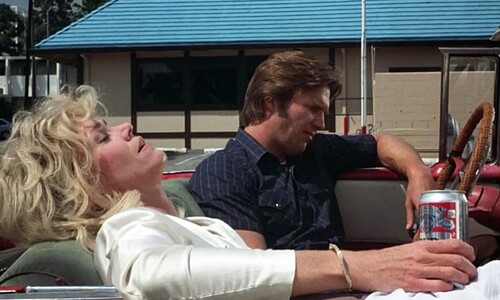 The 1970s were Fonda's glorious decade: she was beautiful, brave, enterprising, fierce. But the 1970s ended, Hollywood itself changed around the end of the decade, and everything 1970s was now the past. In 1986, Jane Fonda was the woman with a past.

An odd one in this very limited list (particularly when one thinks about key omissions such as On Golden Pond, Coming Home or 9 to 5), but I want to achieve two things by including this role.

I felt it is important to acknowledge the impact of the exercise videos on her persona. Suddenly, Fonda was the actress who became an exercise guru. She may have lost interest in the "independent women" cycle, god knows she played many of them, or she had just become detached from life and politics.

Also, The Morning After may not a great thriller, but Fonda is changing gears and trying to say something, a bit about aging, a bit about vulnerability, with her body and her eyes. Her themes are changing.

It is the portrait of a woman who is losing confidence and who is almost about to give up. The body, the hair, the teeth, and the voice are all there, and she is hypnotically watchable from the very beginning as an over-the-hill Hollywood actress who wakes up one morning with a stabbed man next to her.

With Lily Tomlin in Grace and Frankie 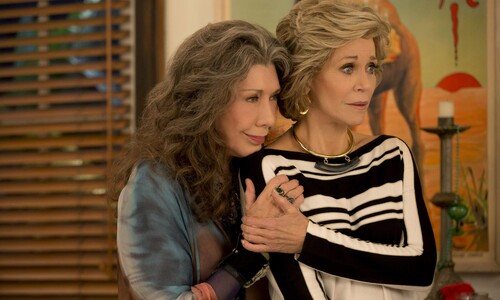 What, almost thirty years between my fourth and fifth choices?

Well, she did disappear from the screen for fifteen years. And unfortunately, her reputation as the queen of aerobics damaged the image audiences had of her. Even today, when I announce I am going to talk about Fonda I can see it in my students' knowing smiles that they are thinking about that odd skinny woman with big hair and long legs doing very strange things.

Her return was, she said, for financial reasons (not that she needed the money, but she needed her foundations and charitable work to keep on helping people) and at first, she accepted what she was offered, no matter how camp she looked (Monster in Law is an example of this).

Fonda had always been a great comedy actress, but in some of these roles, she is a bit lost. This also happens in the very first episodes of the series she co-produced, Grace and Frankie, about two women whose husbands leave them for each other and are forced to be friends in spite of their obvious differences.

The role is a recap of Fonda's persona, and as she developed the role, she became increasingly comfortable. One thing about this role is how it would not make the same sense with any other actress: this is Fonda as she was perceived, and the Fonda who tried, there was the voice and the body, key elements of her life, and there was the intensely political gesture, once again, of saying something very few people were saying: yes, you can be seventy and still have sex.

A further five roles? You got it.

One would have to include Barbarella, as it expressed so well the kind of actress she decided NOT to be and the kind of projects she hated; A Doll's House must be nowadays one among the most obscure of her roles, but it does use Ibsen's Nora as a blueprint for Fonda in the seventies; then Coming Home, because it meant another Oscar and because it is a great example of her "independent woman" roles of the decade; 9 to 5 because she needs to be appreciated as a comedy actress in the midst of so much drama, and she was almost unrecognizable in Colin Higgins "feminist" comedy; On Golden Pond because it was a film she produced and because she also wanted to say something here, this time not about sex or politics, but about how she felt inside as a vulnerable girl unloved by a harsh demanding father.

Finally, almost symbolically, I have a soft spot for her brief appearances as Leona Lansing for a few episodes in The Newsroom, as it is probably the closest to the way she thinks of herself. All Fonda.

As Leona Lansing in The Newsroom 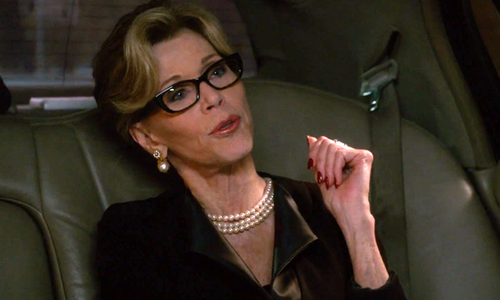